We are pleased to publish a report documenting the Walk Audit of a portion of Cummins Highway (between Washington Street/Roslindale Square and Rowe Street) performed by members of WalkUP Roslindale in December 2019. We identified many opportunities to dramatically improve safety along this stretch including converting one way streets to two way streets, increasing the number and safety of street crossings, and repositioning bicycle lanes between parked cars and the sidewalk. Please check out the report to read our specific recommendations for each intersection. Our next steps will be to set up meetings with the appropriate city officials and elected leaders to begin to address the highest priority items. If you have any thoughts about the report or what our top priorities should be, please leave them in the comments below or write to us at audit@nullwalkuproslindale.org.

On Saturday, December 7, 2019, members of the WalkUP Roslindale community advocacy group conducted a walk audit on a portion of Cummins Highway in Roslindale (between Washington Street/Roslindale Square and Rowe Street). The purpose of the walk audit was to assess walking conditions and to develop a list of recommendations to present to group members, supporters, stakeholders, and ultimately the Boston Transportation Department.

What Is WalkUP Roslindale?

On December 7, 2019, eight WalkUP Roslindale members and supporters conducted the walk audit along Cummins Highway, after initially convening at the Roslindale Village Main Street office for a brief “Ped 101” presentation on safe and comfortable walking. (The route is presented in Figure 1.) 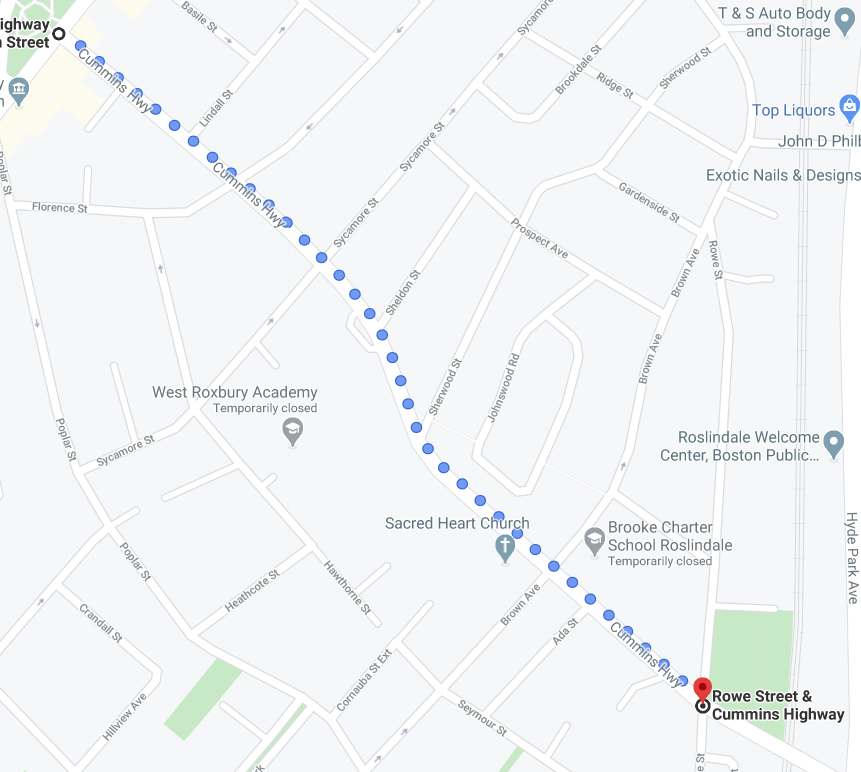 Past accidents, important point of access to the square

The audit did not specifically focus on bicycle transportation, but some WUR participants indicated that they regularly bicycle along Cummins Highway. They observed that existing bicycle lane markings are located only in the on-street “door zone” and hat drivers routinely drive their cars in these lanes. On balance, the audit group found that Cummins Highway could be unsafe and unsettling for riders who are less than confident in their cycling skills. One idea that has come up is separating bike lanes from automobile traffic. Boston has begun placing bicycle lanes between parked cars and sidewalks, and has even started to install “cycle tracks” completely separated from motor vehicle driving and parking lanes. See further discussion in Appendix B.

The one-way configuration of streets in Roslindale Square may contribute to some traffic safety problems for pedestrians and others. The one-way traffic pattern requires drivers to circle through the Square, increasing vehicle volumes and causing driver frustration. In addition, on the segment of Washington Street that borders Adams Park, cars are moving faster than they would if the street were two-way. Cars turning right on Washington from Cummins and then attempting to turn left on South Street cause significant back-up. WalkUP Roslindale has indicated a desire to work with the Boston Transportation Department to assess whether certain streets that intersect with Cummins Highway – such as Washington and Florence – should be converted back to two-way.

There are too few safe, legal crossings on Cummins Highway between Washington and Florence, and pedestrians at signalized crossings need to wait for a prolonged period of time before getting a WALK signal. Recommendations for improving specific street crossings and signal timings are presented in the report sections that follow.

Cars often park and double-park right next to and even in crosswalks, creating hazards and obstructions for pedestrians as they and the drivers of oncoming vehicular traffic are unable to see each other around the parked cars. Walk audit participants suggested that removing a small number of parking spaces that are immediately adjacent to crosswalks would greatly enhance pedestrian visibility and safety. In addition, the City should consider using flex posts and plastic bollards at some locations to prevent cars from illegally parking in crosswalks.

Many cities in the U.S., including Boston as well as New York and Washington, DC, place bicycle lanes between sidewalks and parked cars to increase bicyclist safety and to provide an additional buffer between cars and pedestrians on the sidewalk. Furthermore, protecting bike lanes can help to slow down cars by preventing vehicles from using bike lanes as additional travel space. On Cummins, the audit results suggest that the City should consider placing bicycle lanes between the sidewalk and parking lane. Bicycle lanes are increasingly being installed between cars and sidewalks. See further discussion of this in Appendix B.

The audit revealed localized problems at each intersection in the study area that should be addressed for the sake of pedestrian safety and convenience and to promote Cummins Highway’s overall walkability. Specific problem areas and proposed solutions identified through the audit include the following:

Although auditors were pleased to see that there is no turn on red at this intersection, the “No Turn on Red” sign for northbound drivers is too far across the intersection and is not clearly visible to drivers. Pedestrian signal buttons – a.k.a., “Beg buttons” – at all pedestrian crossings should be eliminated and replaced with automatic pedestrian crossing phases at all times of the day and night. Cars were parked illegally in front of the Roslindale Community Center at 6 Cummins Highway. There was significant back-up at this intersection because of cars turning right off of Cummins and then turning left on South Street, which requires drivers to cross multiple lanes within a very short distance. The one-way design for traffic flow around Roslindale Square causes considerable confusion and vehicular traffic congestion and it was suggested that returning Washington Street to two-way flow could make a significant improvement in this regard. It was also observed that the paint marking the bus lane on Washington is fading at this intersection, that a “don’t block the box” installation would be helpful here, that the signal time for pedestrians is too short, and all signal phases could be turned over more frequently.

Auditors noted that this intersection would work well as the location of an additional crosswalk on Cummins, as there is not currently a crossing between Washington and Florence. Another crossing is needed due to significant pedestrian traffic with the Parkside on Adams apartment building, Roslindale Community Center, and post office.

This intersection was suggested as another potential location to add a mid-block crossing on Cummins between Washington and Florence, in light of a high volume of pedestrian crossings.

The auditors noted the confusing timing of traffic and walk signals at this intersection. The walk signal shifts from a countdown to “Don’t Walk” without a pause. Motor vehicle drivers traveling on Florence have to wait for 3-4 minutes. Another identified issue was the too-wide curb cut pattern, which do not force cars speeding on Cummins to slow down when turning onto Florence. There is also a large, marked-off space on the northwest side of the intersection that has no apparent purpose (there is no bus stop on this side). An auditor suggested that if parking were removed along that side in the future (e.g. for a new crosswalk), this space could be used to add a parking spot. Bus stop markings need to be repainted. Additional recommendations include installing a trash receptacle, adding trees along the sidewalks, eliminating “beg buttons” for the pedestrian signal phase, pulling parking back from the corner on Florence, and making Florence a two-way street north of Cummins Highway to provide more connectivity to disperse and slow vehicular traffic.

The removal of a parking spot at the northwest corner of the intersection, by Image Dry Cleaners at 87 Cummins Highway, is needed in order to improve daylighting for this intersection. Infrastructure (e.g. speed humps or stop signs, or both) is needed to slow cars speeding down the hill; a resident walking with his son and two dogs told the auditors that he and neighbors have asked the City for these improvements in the past, with no effective response. Curb cuts are currently too wide. A trash receptacle is needed by the bus stop at this intersection and the electrical utility box in the middle of the sidewalk on the south side of Cummins should be relocated closer to the curb to allow a sufficiently wide and safe pedestrian travel path.

Improving the safety of the crosswalk at this intersection is especially important with the close proximity of the Washington Irving Middle School. A parking spot should be removed to allow for better daylighting and to bump out the curb and median. A beacon (such as RRFB or HAWK) should be installed to increase visibility for pedestrians, especially students, as they cross. Auditors suggested that moving the 14/30 MBTA bus stop at 93 Cummins Highway opposite Sherwood Street (where there is not a crosswalk) to the Sheldon/Irving intersection would increase visibility and provide a better drop-off location for students.

Auditors noted uncleared snow at the corner of this intersection. If the 14/30 MBTA bus stop stays at its current location opposite Sherwood, a crosswalk should be added to facilitate access to the bus stop.

The curb cuts should be narrowed to slow turning vehicles, especially at the southeast corner turning right onto Brown from Cummins. Improved daylighting for the crosswalks is needed, particularly by the Brooke Charter School (southeast corner).

This intersection requires significant redesigning/re-engineering (i.e. converting it into a signalized intersection). The bike lane on Cummins, which currently ends at Brown, should be extended (especially as Cummins is too wide after the intersection, encouraging speeding). Crosswalk visibility needs to be increased and flex posts should be added. An auditor noted that a leg of the crosswalk is missing – on the western side of the intersection, across Cummins. The curb cuts are far too wide, especially heading north on Rowe. Cars are currently traveling too fast to stop for pedestrians at this intersection; this location is particularly dangerous due to speeding downhill vehicular traffic from both directions.

Locating bicycle lanes between parked cars and sidewalks has been shown to provide increased protection for cyclists. The diagram below, taken from the City of Boston’s design for Commonwealth Avenue, illustrates the intersection layout. Bicyclists must yield to pedestrians at designated crossings. The prohibition of parking within 20 feet of the intersection and the creation of large raised platforms increase the visibility for all roadway users.

Similar designs for bicycle lanes between the sidewalk and parked cars have been installed on Ames Street between Main and Broadway in Kendall Square, Cambridge and near Prospect Park in Brooklyn. 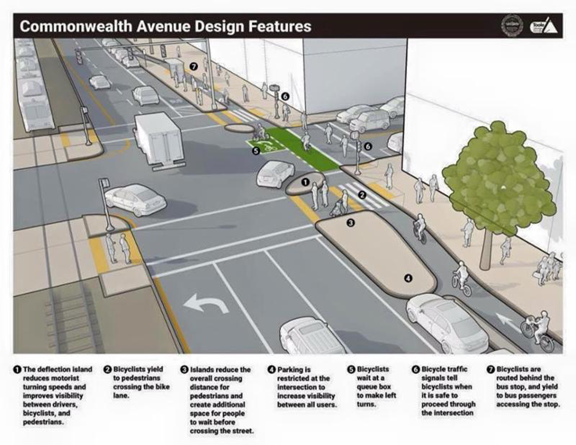 This site uses Akismet to reduce spam. Learn how your comment data is processed.

Get New Posts By Email