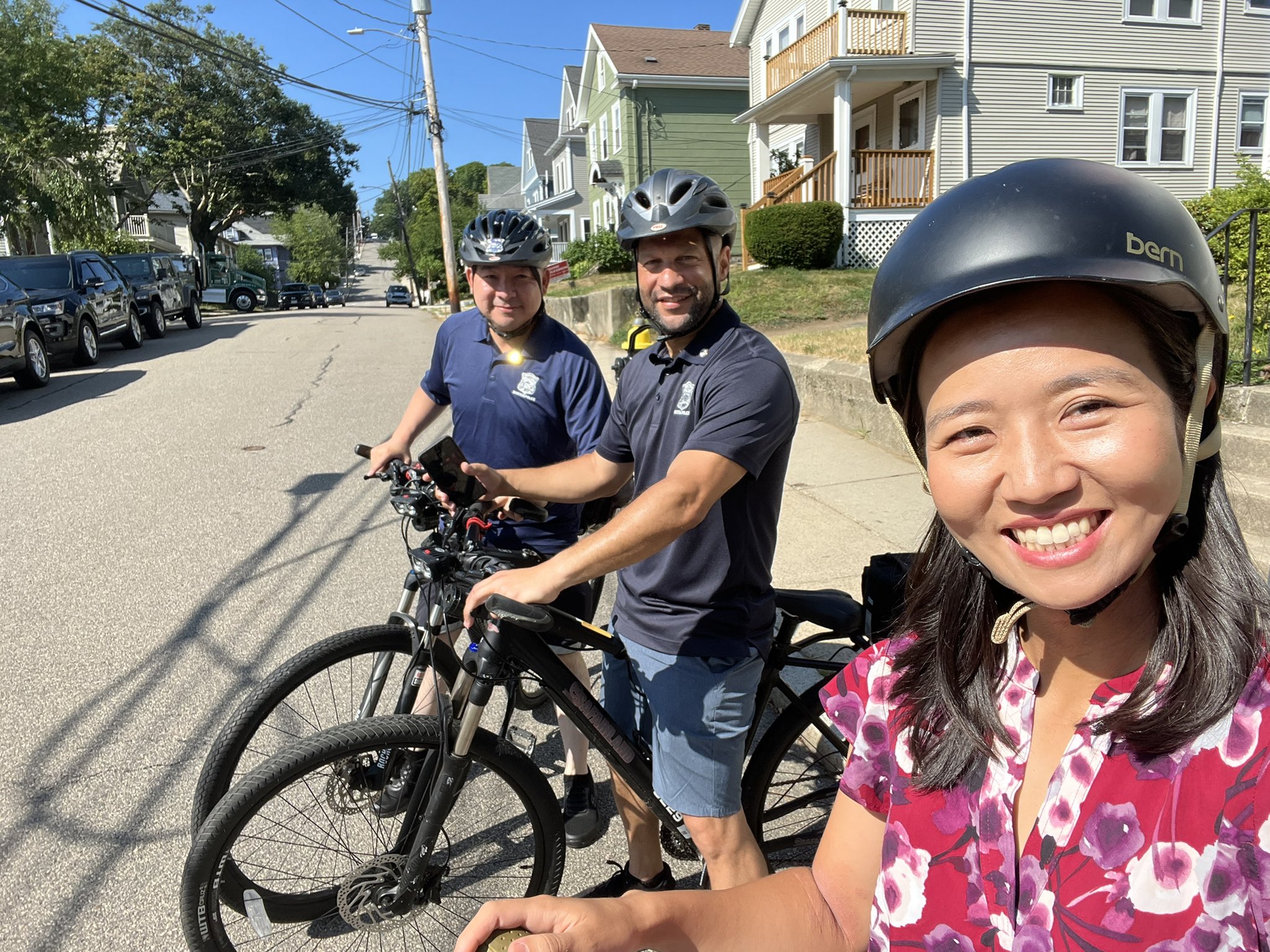 For the first of what we hope will be many community group bike rides with Mayor Wu to come, Adams Park in Roslindale Square will be the starting point on this coming Thursday morning, 11 August 2022, at 8 am. This ride is open to everyone, all ages and types of riders of bicycles. Other key details:

Thanks and hope to see you there!

WITH 2018 having drawn to its inevitable close, now seems like a decent enough time to look back on another year in the life of WalkUP Roslindale, your neighborhood walk-bike-transit-Y/QIMBY (Yes/Quality in My Backyard) citizens advocacy group. In the opinion of one member of group management, here are the top 10 things that happened this year. Comments, corrections, and additions are always welcome!

Our long wait for the arrival of the Blue Bikes (f/k/a Hubway) Bike Sharing system in Roslindale is finally over. The city recently announced the imminent installation of 19 new stations, including five in Roslindale. (We understand a total of 60 new stations will be added throughout the city over the entire year of 2018, and another 30 next spring.) The new Roslindale locations are shown on the map below, including two right in the main street area, one near Archdale, one near Centre and Weld, and one at Belgrade at Walworth.

This is a good start and we expect these bikes will be much-used, especially once a Forest Hills station goes in (delayed, likely subject to construction completion), making for better access to the Orange Line and the Southwest Corridor.

While we applaud the City and Blue Bikes for extending the network further out into neighborhoods like Roslindale, we’re a bit disappointed and surprised to see no station planned at the Commuter Rail which is would be a very logical inter-modal destination. While the other village stations are not far from the Commuter Rail, we suspect that bikeshare right at the station would encourage more people to avoid driving to the T. Another gap in the system is any stations in Eastern Roslindale — down Cummins Highway, Metropolitan Avenue, and Hyde Park Avenue/American Legion Highway. Bike share in this areas could enable many people who are currently poorly served by transit to reach the Orange Line, Commuter Rail, and major bus stops without driving.

Our hope is that the new stations get so much use right off the bat that the City will add these other locations in 2019. If you haven’t joined Blue Bikes yet, now is the time! Note that many employers sponsor a Blue Bikes membership, and income-eligible folks can get a significantly discounted membership.

Join us in two weeks, Sunday, May 20, 2018 for an easy bicycle tour of the American Legion Parkway green areas. The tour will run from 8am-10:30am and start at the Walgreen’s end of the Stop-n-Shop Plaza on American Legion Highway, near Hyde Park Ave. RSVP to Laura Smeaton (shoplaura@nullmac.com) or Lisa Beatman (lisabeatman@nullyahoo.com, 617-306-1283). More details below or download the PDF flyer.

END_OF_DOCUMENT_TOKEN_TO_BE_REPLACED

The Boston area’s bike share program (which will soon be known as Blue Bike) just published its proposed locations for its upcoming expansion. We are delighted to see several spots in and around Roslindale Village. Importantly, this infrastructure investment will allow people who live nearby to get to and from the shopping district, the commuter rail, and bus stops, with a 5 minute bike ride who might previously have driven. It should also increase access to and from the neighbor from nearby areas, especially Forest Hills which will soon have thousands of new residents. When paired with the Gateway Path, the new bike share locations will greatly improve our connections with our neighbors.

Be sure to take the survey (once it becomes available–at the time of this posting Survey F is marked as “coming soon”) to provide your feedback, and leave comments on the post. The Roslindale locations are shown below — an “a” and “b” spot number reflect alternatives, click through for a larger version:

And here’s the whole map of proposed locations:

In case you missed it, Boston’s trusty Hubway bike share program is getting a new name, a makeover, and (hopefully) a substantial expansion. The City of Boston has partnered with Blue Cross and Blue Shield of Massachusetts for the rebranding (and sponsorship). Of particular interest to WalkUP Roslindale folks should be the upcoming “open house” to discuss the planned bike share location(s) in Roslindale, set for Thursday, April 12, 2018, 6pm-8pm at the Roslindale Community Center, 6 Cummins Highway. Hope to see you there!

Our friends at Streetfilms offer The Right to Walk for your viewing pleasure. It’s 4:53 of to-the-point, quick-hit, smart thinking about why walking is so critical to every city’s health. And is also does make me wonder what percentage of the total transportation budget in our own city of Boston is devoted to walking, cycling, and transit?

Going forward, WalkUP Roslindale will try to keep a current inventory of improvements to our neighborhood’s pedestrian, cycling, and transit infrastructure. Accordingly, as of 26 February 2018, the below is what we’re aware of:

We were thrilled to see the City of Boston and MBTA test out a trial run of a dedicated bus lane on Washington Street inbound this morning. WalkUP has strongly advocated for the City to implement this bus lane concept along the very congested Roslindale Village-to-Forest Hills corridor. Reports were universally positive — to get some flavor of the community reaction, check out our Twitter feed for dozens of retweets of reactions and photos. We’ve also include a gallery of photos below.

Members of the WalkUP Steering Committee were out and about along the route to inform riders of this lane and explain the process behind it. The City plans to test this dedicated lane again next Tuesday, December 19, during the morning commute. Dedicated bus lanes are proven methods for significantly improving bus commute times and encouraging more people to take public transportation. During the morning and evening rush hour, almost 60% of all travelers on Washington St are riding a bus –these riders need a faster way to reach their destinations and go to-and-from the main subway line at Forest Hills. And if the bus lane operates as successfully as it appeared to do, many more are likely to switch to the bus to save time, thus even further increasing the percentage of travelers on mass transit.

We should note that we are also very pleased to hear from cyclists who used this dedicated lane today of the ease of their commute and lack of any bus-bike conflict. There was some concern going into the test about this issue, but at least today’s data points suggest the cycling experience will be much improved rather than diminished. We will continue to monitor the cyclist experience in this dedicated lane and believe it can be a boon for bike riders in addition to bus riders.

WalkUP will continue its strong advocacy to the City of Boston to implement a full multi-week pilot of this dedicated bus lane in 2018 to fully gauge its effectiveness and effects. The full pilot should consist of a dedicated lane inbound to Forest Hills in the morning and a dedicated lane outbound to Roslindale Village in the evening. We’d really like to make this happen as soon as possible–tomorrow is not too soon!

Please contact Mayor Walsh, City Councilor Tim McCarthy, and our At-Large City Councilors (Annissa Essaibi-George, Michael Flaherty, Ayanna Pressley, Michelle Wu) to express your support for this dedicated bus lane and request a full multi-week pilot as soon as possible in 2018. You can also respond to this tweet from BTD or email them at btd@nullboston.gov. It is very important that our city officials hear from us on this. We appreciate their willingness to test this out and want them to know many Roslindale residents support this concept!

We look forward to seeing this dedicated bus lane in action again next Tuesday!

We have long awaited the arrival of the Hubway bike sharing system in Roslindale–and it finally appears to be time! The City has scheduled two community meetings to provide information and solicit feedback on proposed station locations. It is important that our leaders and our community see a turnout of support for expanding access to the system.

The first Roslindale meeting will be this Wednesday, September 20, 2017 at 6pm at the BCYF Menino Center (the Archdale Community Center), 125 Brookway Road.

The second meeting is Thursday, October 26, 2017 at 6pm at the Roslindale Community Center, 6 Cummins Highway.

Get New Posts By Email